Here in the North East, the weather has been extraordinarily warm and sunny for March.  Signs of spring are everywhere: red buds on deciduous trees, returned song birds, ferns in the forest, spring peepers…  There have even been mosquitos and ticks!

On Saturday, Muin Mound Grove celebrated early.  Since the celebration fell on St. Patrick’s Day / Irish Heritage day, I offered to lead a ritual in which we would honor Ériu and Amergin.  Now, I’ve lead public rituals before.  My first was on Imbolc and my second on Beltaine.  Each were ADF style Druidic rites but took place in the Mohawk Valley and for the once active Utica Pagan Network.  They were largely Wiccan and so Druidism was somewhat new to them.  Since it was also relatively new to me, the rituals were a bit rocky.  This Springtime rite would mark my first ADF ritual performed with my grove.  Needless to say, I was very nervous. 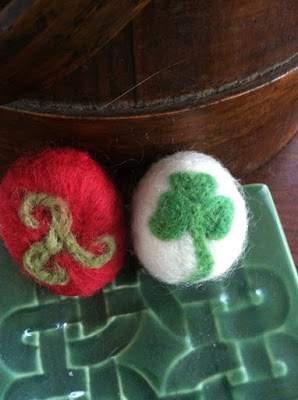 For starters, many of my grove mates have been practicing Druids of some form for years.  They are experienced so leading a ritual for them, while necessary for me to grow, was nerve-wracking!

Some bumps in the road helped me realize a couple things that seem important for new liturgists: keep it relatively simple and stick with your talents.  I had very ambitious ideas which included utilizing traditional Irish music as a way to honor Ériu and Amergin.  This soon brought a lot of stress as it became apparent that a) not everyone was as familiar with or as interested in some of the songs I was selecting, b) not many Irish songs worked in this setting and c) I’m not a musical bard!  I decided to stick with the familiar music and leave the rest to the experienced bards .  I put most of my focus, then, on the prose.  I’ve never been much of a lyricist or a poet – but I’m fairly good with prose writing.

Prior to the ritual, I lead a workshop on felting eggs which people could use as offerings or decorations around the home.  For many, this was a new art form and people expressed a lot of interest in it.  Even my husband got in on the fun, crafting a felted viking head!  At left you’ll see the main offerings for the rite – felted eggs for Ériu and Amergin.  These were placed in the fire and we visualized them going to Ireland.

The actual ritual went well aside from a few musical blips (we collectively screwed up on a chant or two).  Everyone complimented me on rite so I feel quite successful!  Public, group rituals are very different from the private ones I do in my home.  It was good for me to step out of my comfort zone and try my hand at group work.  I’m sure I’ll do more in the future.

For now?  I’m going to relax and enjoy the spring.