The Vernal Equinox approaches and, as is customary because of our modern schedules, Muin Mound is to celebrate on the weekend – March 17th, to be exact.  For those of you who live under a rock, that’s St. Patrick’s Day.

Last year, I posted about why I use this day to celebrate my Irish heritage.  I also discussed why I no longer buy into the celebration of “All Snakes Day” or “Return of the Snakes.”  To summarize, it all comes down to a desire not to focus on religious divisiveness and instead celebrate a commonality.

A few days before Muin Mound’s Imbolc celebration, I woke up from a dream and felt very moved to lead the Spring Equinox Rite to honor Éire, Ireland herself.  What better time than when so much energy is focused on her (albeit mixed with racial stereotypes and green beer)?  My grove was favorable of the suggestion so I’ve been working on the ritual outline for the upcoming occasion (despite all my other obligations.  My ancestors insisted quite a bit.).  In addition to honoring Éire, we’ll also pay respect to Amergin, the ancient bard who made a pact with her which allowed our Irish ancestors to settle there.  In my opinion, this began a tradition of reciprocity between us and the land.  For allowing the Míl to live on Ireland (and defeat the Tuatha de Dannan in war), Amergin promised Éire (and her sisters Banba and Fódla) that Ireland would forever carry her name.

The challenge for me was how to include the celebration of Spring into this mix.  Many in the grove still wanted that emphasized which made sense to me.  I decided to include language that praises the green of Ireland while also welcoming the return of our own green here in America.  I also focused on a rebirth of our spirituality, inspired by Ireland, just as the spring marks new life.  Thus, we will meditate on physical and spiritual rebirth. 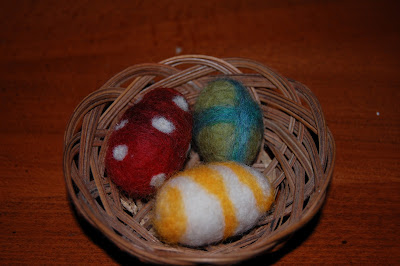 Another challenge was a grovemate’s request that I teach a tutorial on making felted Ostara eggs.  True, this would take place early in the day and well before the rite.  Yet the expectation is likely that many will use these as offerings.  Indeed, I made one to be the main offering!  Of course, there’s the very Anglo-Saxon energy of Ostara eggs which is not, at first thought, compatible with a rite to honor Ireland.  What to do, what to do…?

I remembered reading about the supposed Druid Egg, a magical stone/egg produced by snakes and used by Druids.  The snake, in many cultures, represents rebirth and is as good a spring symbol as the chicken!  And I find myself, in trying to avoid an “All Snakes Day” celebration, making felted, Ostara-inspired, snake eggs.

There is cosmic humor in this.

Still, our recent Irish ancestors, influenced by Germanic settlers, did dye eggs to mark Easter. So we will be honoring the ancient and more recent ancestors of Ireland.

If you are looking for a way to tap into the energy of St. Patrick’s Day without the Catholicism or mixture with Spring Equinox customs, I highly suggest reading this post, “Liberalia, Hero-Feast of Cú Chulainn” by Aedicula Antinoi: A Small Shrine of Antinous.  It’s inspired me to do a private devotional to Cú Chulainn this month.

And I’m curious about my readers – how are you marking St. Patrick’s Day if at all?  What about the Spring Equinox?