Imbolc is fast approaching and I can’t help but find myself anticipating it.  As Brighid is my patroness, this holiday has become particularly important to me.  The Wiccan group I used to work with emphasized quiet introspection, new beginnings, and storytelling in the dead of winter.  To them, it was Candlemas.  They did not particularly look to Brighid.  The holiday did not take on any real significance to me until I began studying Druidism and Irish lore.  Learning about and worshiping Brighid was like meeting a long, lost family member.  My ancestors in old Ireland would have honored her.  Customs surrounding Brighid have survived into Christian times thanks to her sainthood.  Some are still practiced in the country.  You can read about some of them in an essay I wrote for the Artisan study program and on Ord Brighideach International, an international order of flamekeepers.

There are many things one can do to celebrate Imbolc.  Here are a list of traditions in my own home, grove, and Irish culture in general. 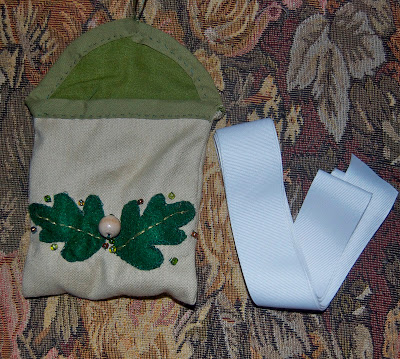 The Brat Bríde (Mantle of Brighid) is an old tradition in which a piece of fabric is placed outside on or around Imbolc to receive Brighid’s blessing as she travels the land.    Different counties in Ireland had/have their own variations.  In County Mayo, for example, the cloth is red and placed besides rushes.  The rushes are brought in during a Threshold Rite (prior to making crosses) and the cloth retrieved in the morning after it has soaked in the blessings.  It is brought in before the sun rises (Duinn, p. 136).  In County Tipperary, a black ribbon was usually used and placed upon a tree (p. 137).  County Cork tradition suggests that the mantle was not washed (p. 137).  Despite the variations, the commonalities shine through. It is a piece of fabric – arguably fine fabric or natural fabric like linen. It is placed outside and brought in before sunrise.  It is used to heal and protect.  The ritual must be repeated yearly to renew the power (p. 138).  Connected to the Brat Bríde is the collection of dew.  Because the fabric would be brought in before the sunrise, often it would have accumulated moisture.  The dew is believed to have healing properties as well.

At left you’ll see my own Brat Bríde.  It’s simply a nice, white ribbon.  I put it out last year for the first time and will continue to renew its power this year – both at Muin Mound Grove during our ritual and on Imbolc itself.  I crafted a linen bag to store it in and adorned it with oak leaves as they are connected to Kildare and thus to the Lady herself.  I use this ribbon in healing rites – not as often as I could, I’ll admit.  I like using a ribbon because it is small yet long enough to wrap around a body.

Fire is an important element in Brighid’s lore.  People still tend her flame; she is said to place the “fires of inspiration” in an artist or bard’s head; she is a blacksmith; many healing practices require fire (tea, hot packs, warm baths, etc…).  If you are new to Druidism or Celtic-influenced spirituality, lighting a candle on Imbolc and meditating on Brighid and fire can be a very basic but powerful way to mark the occasion.

All good holidays involve food.  To the old Irish, Imbolc marked the beginning of spring.  It’s difficult to see it that way here in Northern NY.  Usually, the snow doesn’t melt until April.  This year, Imbolc is only a few weeks away and we’ve barely had any snow.  Perhaps it really will be spring here?  All the same, the end of winter was a time to feast as the hard times would be ending for another year.  Farm animals, especially the sheep, would begin lactating at this time of the year which meant an abundance of dairy products.  Milk, cheese, and butter are traditional fare at this time.  Many families may wish to make butter using heavy cream.  It’s very easy to do – there are several tutorials out there.  Ronald Hutton states that Imbolc in Ireland began with “a formal supper, shared by the family, to mark the last night of winter.  Very often some of the food, such as a cake, or bread and butter, was placed outside on a window-sill as a gift for the saint” (p. 135).  A family may wish to work together to create a meal then give some of it to the Goddess herself.

Imbolc finds me getting in better touch with my Irish heritage.  Winter time means loads of potato dishes in my household.  A traditional Irish dish is colcannon (cabbage and mashed potatoes).  It’s very tasty and involves, of course, butter!  Here’s my favorite recipe.  In fact, eating potatoes became an Imbolc tradition (Duinn, 97).

The Brìdeag is a doll depicting Brighid and basically means “Little Bride.”  The doll was carried by a procession through towns.   Think of it as Imbolc wassailing.  The doll was made of straw and wore colors and accessories based on local customs (Duinn, p. 84). The bearers brought her to a home and implored the occupants to show her honor.  Each party had a part to say (p. 90-91) as in the Threshold Rite.  Brighid would be brought in and sometimes placed in a special bed.  I have not fully explored this tradition myself.  I am toying with the idea of leading Muin Mound’s Imbolc rite next year and basing the ritual around the Brìdeag. 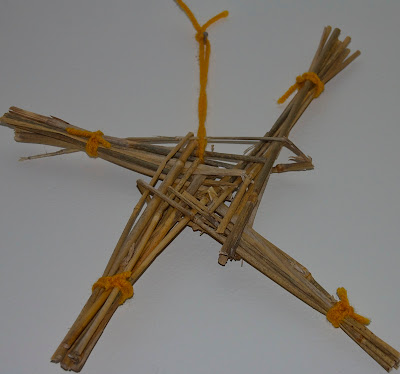 Brighid Crosses are among one of the most recognized Imbolc traditions.  Although some vary depending on the county, they are usually four-armed and made of straw.  Traditionally, they “were … left up for the next year, to protect the house from lightening, and replaced on the next St. Brighid’s Eve” (Hutton, p. 136).  In some places, they are considered fertility charms (Duinn, p. 128).  Although some burned the crosses, they were often buried to produce fruitful crops.  They were also used to pour milk through to bless the liquid (p. 129) or hung in stables to bless the animals (Hutton, p. 135).

In Muin Mound, our tradition has been to hang them as charms against fire damage.  You’ll see one of mine at right.  It is getting lose, but it’s certainly blessed my home!  That cross hangs in the kitchen and I have a couple more in the living room.  Our grove advocates hanging them until they deteriorate.  We do not burn them but rather return them to the earth.  Unfortunately, Muin Mound will not be making any this year due to, I believe, poor wheat production.  If you would like to make a Brighid cross, wheat works fantastically but other reeds would do.  Soak them first to make them pliable.  They seem complicated to make but are actually very easy.  I’ve found that watching another make one is the best way to learn.  There are several tutorials on Youtube!

How Will You Celebrate?

I’ve explained the historical precedence of several Imbolc traditions and wrote about some of my own – individually or with my grove.  There are other traditions.  Some are specific to a region.  I’m getting particularly interested in what my ancestors from County Mayo would have done.  As explained above, their brats are often red.  I plan to incorporate some red on my white ribbon.  If you have been celebrating Imbolc for a few years now and are looking for new ways to deepen your relationship to your ancestors and Brighid, I encourage you to research region-specific customs.  It can be very enlightening!