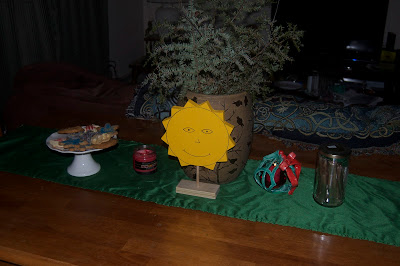 I hope all of my readers have had a wonderful Winter Solstice.  I know I have.  It was very overcast this morning, but the sun rose and the light will increase now!  I made a libation to the sun this morning.  The solar wheel is such a huge part of Druidism.  It seems we can often take the sun for granted – crazy when you think about how important it is for life!  I am always glad to celebrate it.

As many of you know, there is little evidence that the ancient Celts marked the Winter Solstice in any way.  There is a great possibility that the pre and/or proto Celts placed significance on that time, however, due to the various monuments that align with the sun that day.  One example which seems particularly Druidic is Newgrange in Ireland.  I was lucky enough to visit that monument earlier this year and have thought of the darkness within that ancient building much throughout the Solstice.  It is said the Angus mac Og lives there and that it was built by An Dagda.  I often think about how I could better incorporate that into my personal practice.

Besides the monuments, the Irish Celts didn’t truly begin to mark the occasion until various invaders imported their Yuletide traditions.  Finally, Christianity brought Christmas traditions and it all got mixed up like a delicious but occasionally sickening batch of cookie dough!

I already posted a bit about my Yuletide traditions during the Witches’ Yuletide Ball earlier this month, but several friends have asked to learn more about what I do.  Like many I know, I didn’t grow up as a Druid so I don’t have established family traditions.  Every year is a little different  but some things are emerging as constants.  The Winter Solstice finds me more eclectic than the rest of the year.  I become more mindful of my Norse ancestors and try to learn a little more about their old traditions. 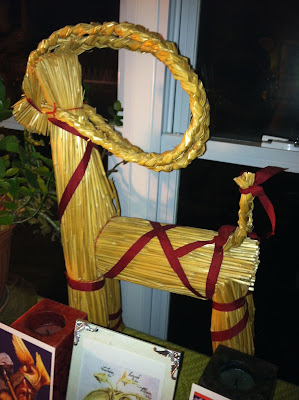 I’m particularly fond of the Yule Goat.  My heathen-oriented grovemate Eir led a Norse sumbel in which we all honored Thor this year.  It is said that Thor rides a chariot pulled by two goats.  It seemed fitting to incorporate the Yule Goat into our celebration.  I’ve had one for a few years now and he’s become my favorite Solstice decoration.  He connects me to my Norse ancestors.  We have other decorations including a tree, wildharvested evergreen boughs, a kissing ball I made, stockings, candles…  The newest decoration, and what’s sure to become a family treasure, is a wooden sun my father gave me as a birthday/Solstice gift.  I was very touched by it because it marks a growing acceptance of my faith.  On the back of the sun is a picture of Jesus that my dad pasted to the wood.  He told me that I could remove it if I was offended, but I decided to leave it as a reminder of my past, my family, and our ability to find common ground.  It’s definitely a step in the right direction!  It’s also a good reminder of how many religions honor the birth/rebirth of a solar deity this time of year.

A lot of what Weretoad and I do to mark the Solstice is similar to what many people do to mark Christmas.  We exchange gifts, bake cookies, send cards, listen to seasonal music, and sometimes sing along!  We actually took some time to sing Pagan carols at Muin Mound this year.  Although some of the songs were reworded awkwardly, I had a lot of fun laughing along with my Druidic family.

Of course, many of our traditions involve magic and ritual of some sort.  Besides paying honor to the sun and other Solstice-related Gods, we wassailed the trees at Muin Mound grove.  Basically, we gave them libations and prayed for a fruitful spring and summer.  At home, I’ve been giving offerings of charged water to the evergreen trees inside.  I’ve also made an offering to my Norse ancestors and have been continually lighting incense for Brighid as I craft gifts for friends and family.

Like other people in December, I spend a lot of time in the kitchen which means there’s some kitchen magic!  Bowls are stirred sunwise, tea is brewed to calm nerves, and meals are made with specific intentions.  I made cookies in the shape of suns, trees, snowflakes, and triskles.  Well…  I attempted triskles using my cookie press.  They ended up looking a bit like penises, but that’s ok too!

For Pagans of many traditions, the Winter Solstice is a time of gathering with family and friends.  Just as our ancestors did, we need the comfort of our tribe in the dark, cold winter.  Unlike other traditions, I think many in the Neo-Pagan community place more emphasis on introspection in December.  Many of us take quiet time to meditate on the sun, winter, the changing seasons, the new year…

So for my curious friends, my Winter Solstice traditions are probably very similar to your own holiday practices!  Any differences are a result of my polytheistic, animist, magical religion.

I would love to hear more about how my readers celebrate their winter holidays!  Blessed Solstice everyone!

One thought on “My Winter Solstice Traditions”